Big Al and the Heavyweights originally formed in 1996 as the Unknown Blues Band, with founding members Al Lauro, Warren Haynes (Allman Brothers Band and Gov't Mule), and pianist Rick Gergen (Sweethearts of the Rodeo).  Although, Warren is no longer in the band , Big Al has formed a solid array of musicians and has consistently toured and been featured at venues and festivals throughout the US. The band has released six critically acclaimed CDs of original roots music. Recently, their original compositions "Bound By Love" and" World Full of Trouble" hit 1k plays on Apple's iTunes.  The current  band features Louisiana Music Hall of Fame piano player vocalist, Wayne Lohr along with guitarist vocalist extraordinaire Marcel Anton and solid bassist vocalist Mark Parsons.

"World Full of Trouble" was recorded at famed Suite Mix Studios in Slidell, LA noted for Funky Meters guitarist Brian Stoltz's numerous recording projects. The CD charted at # 10 on the Living Blues Charts and was frequently played on XMs Bluesville.

Big Al and the Heavyweights'  live performances are family oriented, energetic and most of all fun. This is a show you don't want to miss! 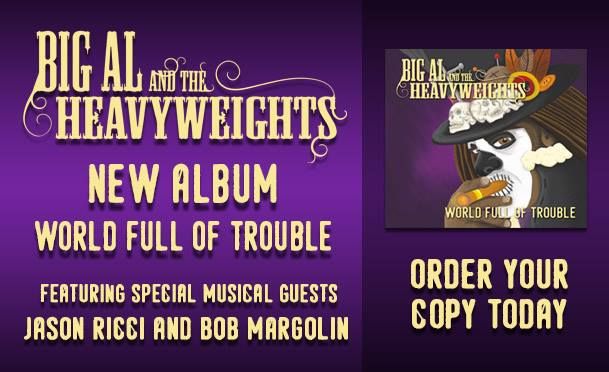 Get the single Below today!

EVEN BETTER?  Pre-Order from our STORE

Single off the latest release coming out February 11, 2022