In The News: Big Al and the Heavyweights at Ace’s Live 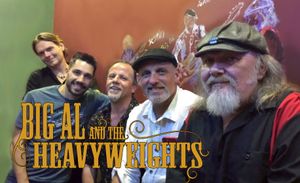 Big Al and the Heavyweights originated when Al Lauro started a group with Warren Haynes, who has played in the Allman Brothers Band and Gov’t Mule. Though Haynes no longer remains in the group, Lauro still does and has formed a solid band around him. The New Orleans-based blues group has played Mardi Gras events including an episode of “Emeril Live” and Universal Orlando’s Mardi Gras celebration.